Importance of Baseline Concussion Testing for Athletes: A Case Study

Background: Concussions are being reported in increasing numbers in youth and young adult populations, with many of these injuries occurring during athletic performance. Visual symptoms are frequent in these patients and include blurred vision, diplopia, visual fatigue with near work and loss of place when reading. Many athletes have exceptional visual skills prior to injury, therefore having a baseline assessment can be crucial to identify post-concussion vision syndrome in these populations.

Case Report: A 23 year-old professional hockey player presented with significant visual symptoms secondary to an on-ice concussion. Complaints included loss of place when reading and blurred, fluctuating vision at near. The patient appeared to have normal binocular vision results but comparison with a pre-season baseline screening indicated significant visual deficits. The patient was treated effectively through a program of in-office and home-based vision therapy.

Conclusion: Pre-season vision screenings are essential in both amateur and professional sports and should include a thorough binocular vision assessment with measurable screening tools such as the King Devick Test or the Vestibular/Oculomotor Screening Tool.  When a concussion with visual symptoms is identified in a player vision therapy can be an effective means of treatment. Approaches to therapy are varied but should focus on monocular skills, binocular skills and integration of visual skills with motor and vestibular tasks. Introduction There has been a significant increase in awareness of the impact of mild traumatic brain injury on vision over the past decade. More than 60,000 concussions are reported each year at the high school level alone (1). Concussion awareness is at an all time high, with many prominent athletes making headlines due to the negative health effects of the mild traumatic brain injuries that they suffer in the line of work. Concussions are now understood to have significant visual impact, with patients frequently describing symptoms including frontal headaches, dizziness, nausea, light sensitivity, blurred vision, diplopia and loss of place when reading (2). Binocular vision abnormalities are frequently noted in these populations in high proportions; research has shown incidences of convergence insufficiency in 40-49% of individuals with TBI, accommodative disorders in 20-51% and oculomotor dysfunction in 60-90% (3-10). The visual symptoms experienced secondary to a concussion can have a significant impact on an individuals quality of life, often severely hindering their ability to work, study and perform activities of daily life.

A population of particular interest in the area of concussion research is the young athlete. Athletes are at a greater risk of suffering a concussion than their peers, more than 5% of high school athletes in the United States will suffer a concussion each year while participating in a contact sport (11). Conversely, athletes often have significant visual advantages over their non-athlete peers; whether due to years of training or natural ability individuals who participate in sports have been shown to have better visual acuity, oculomotor function, accommodative function and reaction time than their non-athlete peers (12, 13). This presents a problem when we consider how individuals are evaluated for visual deficits after suffering a concussion; often a series of “normative” values are utilized, with the patients’ performance being compared to what we might expect from an average individual. Athletes often have above average visual capabilities and despite suffering a concussion might still exceed the “normative” database standards. Baseline concussion screening is therefore essential in young athletes; having an outline of previous visual performance is an absolute necessity when considering whether or not an athlete has suffered visual impairment secondary to a concussion.

A 23 year-old male professional hockey defenseman presented to the clinic for a visual evaluation and binocular vision assessment; he was referred to the office by his team physician. The player had suffered a concussion 8 weeks prior when he was hit from behind into the boards; he had not lost consciousness but was removed from the game as a precaution. He had initially complained of significant physical symptoms including nausea, dizziness, photophobia and poor balance, all of which had resolved in the first month post-concussion. Despite having been cleared to return to play the athlete was complaining of significant visual symptoms, which had begun a week after his injury and were persistent in nature. The most concerning symptom for the player involved frequent loss of place when reading, in addition to blurred, fluctuating vision at near. He was also noticing frequent frontal headaches which worsened towards the end of the day, and noted that his eyes often felt fatigued and heavy during practice.

The athlete was started on an in-office and home-based vision therapy program with a focus on improving his accommodative, oculomotor and vergence function. Vision therapy activities that were utilized are described in Table 2. The program followed a 3 phase progression. Phase 1 involved monocular visual stabilization and focused primarily on monocular accommodative and oculomotor tasks. Phase 2 involved bi-ocular and binocular integration and focused primarily on binocular accommodative tasks, vergence tasks and binocular oculomotor function. Phase 3 focused on visual integration and was focused on tasks requiring complex visual integration (i.e. BIM/BOP flippers) and integration of vision with balance and general motor tasks. As the player traveled frequently with his professional team in-office follow ups were difficult to schedule, but via communication with team athletic therapists and his team physician the player reported a significant improvement in his visual symptoms as he progressed through therapy.

As new research continues to strengthen the link between concussion and binocular vision impairment, many professional teams are implementing some form of vision screening as a part of their pre-season medical workup. As evidenced by the patient in this case pre-injury visual information can be crucial to determine whether or not a patient is suffering from visual dysfunction, and to gauge the severity of their impairment. Vision screenings vary greatly in nature but several specific tests have recently evolved as good indicators of visual impairment post-concussion. The King Devick test is a test of rapid number naming that evaluates saccadic accuracy and can be easily utilized as a sideline screening test. Several studies have shown that the King Devick test is a useful tool to aid in the diagnosis of concussion and the identification of visual dysfunction after an athlete suffers a hit to the head (14, 15). Pre-season test scores are compared with post-injury scores and an increase in test completion time indicates saccadic dysfunction and possible concussion. A simple near point of convergence test can be useful in identifying convergence insufficiency, and is quick and simple to perform (16). Pre-season results indicating no dysfunction in comparison with post-injury findings of convergence difficulty are indicative of a concerning visual dysfunction. Finally, the Vestibular/Oculo-Motor Screening (VOMS) tool is another useful method of testing athletes for visual dysfunction post-concussion. VOMS assesses smooth pursuits, horizontal and vertical saccades, convergence, horizontal and vertical VOR and visual motion sensitivity (17). Although traditionally administered post-injury in conjunction with a symptom survey the test protocol can be utilized for athletes pre-season and compared with post-injury results to assess for any abnormalities.

Once a binocular vision diagnosis has been made in an athlete post-concussion, vision therapy is often recommended to address the visual dysfunction. Vision therapy for concussion is tailored to the individual patient but typically follows the same three phase progression. Phase 1 addresses monocular visual deficits and incorporates oculomotor and accommodative tasks. The goal of monocular therapy activities is to address inter-ocular differences and strengthen general monocular skills. Upon completion of the first phase of therapy a patient should have identical monocular pursuits and saccades in addition to accommodative function. Phase 2 seeks to incorporate monocular skills through bi-ocular and binocular tasks. Vergences, binocular oculomotor function and binocular accommodative function are addressed. Phase 3 involves the integration of visual tasks and the introduction of vestibular and general motor tasks. Activities that were completed in phases 1 and 2 are now combined with walking rails, balance boards, rapid head movement and metronome beats. When working with an athlete phase 3 allows for the introduction of sport-specific tasks; for example, quarter hart chart saccades might be performed with a 4 chart set up as demonstrated in Figure 3 to mimic the visual demands of a hockey player. Other sports vision specific equipment such as strobe glasses and FitLights might also be incorporated into therapy in Phase 3.

Upon completion of therapy the athlete should have binocular vision findings on par with their pre-season visual screening results. Vision therapy for post-concussion visual dysfunction has been shown to be very effective; one retrospective study of 33 patients with post-concussion oculomotor dysfunction found a 90% success rate after 10-30 sessions (18). Accommodative dysfunction is also effectively addressed through therapy; a prospective study by Green et al found a 90% improvement in accommodative function in 12 patients with TBI (19). Other case studies support these findings (20).

Sport-related concussions are increasing in frequency, especially in younger populations. Binocular vision abnormalities are common in individuals who have suffered a concussion but as athletes often have superior visual skills when compared to the general population they can be difficult to identify. Pre-season vision screenings allow for practitioners to more easily identify abnormalities of binocular vision in high performance athletes. If an injury causes binocular vision dysfunction, vision therapy is an effective way to remediate the problem. 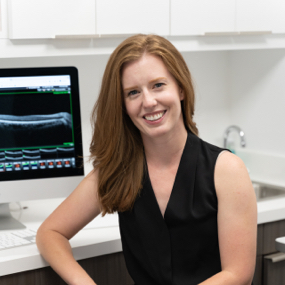 I am very excited to serve the Branford community as a part of the Brantford Eye Care team! I attended McMaster University and received my Honors Bachelor of Science degree in Biochemistry in 2012. I completed my Doctor of Optometry degree at the University of Waterloo in 2016; during this time I took part in an externship program in Mobile, Alabama, where I gained experience in the management of retinal and neuro-ophthalmic diseases.